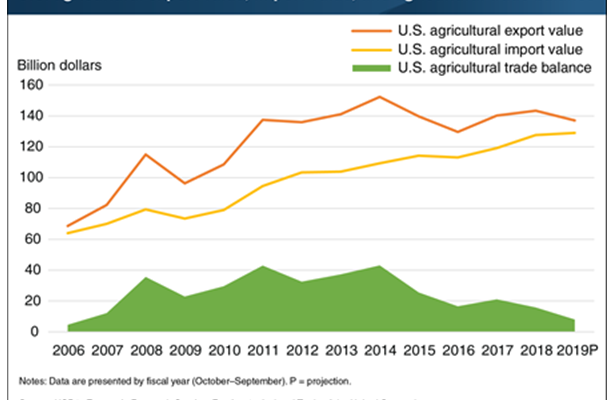 The USDA Economic Research Service projects U.S. agriculture’s trade surplus in fiscal year 2019, ends September 30, will shrink to $8 billion. The $8 billion surplus is the lowest since 2006 when it equaled $4.6 billion.

The surplus totaled roughly $16 billion last year after reaching a high of $43 billion in 2010 and 2014. Lower projected exports are the primary reason for the shrinking trade surplus this fiscal year. U.S. exports are projected to total $137 billion, down $6 billion from last year. The reduction is due primarily to reduced exports of corn and soybeans. U.S. imports are projected to grow due in part to greater imports of fruits and vegetables. The net effect is a narrowing trade surplus.

On the same vein, the first quarter of 2019 wasn’t kind for two of Nebraska primary export products. U.S. exports of meat products were down compared to last year. Beef sales were down 1 percent and pork sales down 14 percent. Of course, last year was a very good year for exports of both meats. In the first quarter, sales of beef to Japan, the top market for U.S. beef, were up 4.5 percent, but tonnage was down 1.6 percent. Also, pork sales to Mexico and China were down 29 and 34 percent respectively due the retaliatory tariffs in place on U.S. pork products. U.S. pork sales to Japan were also down 11 percent. U.S. competitors in Japan have an advantage in the form of lower tariffs due to the Comprehensive and Progressive Agreement for Trans-Pacific Partnership (CPTPP).

Workers Down, Wages Up