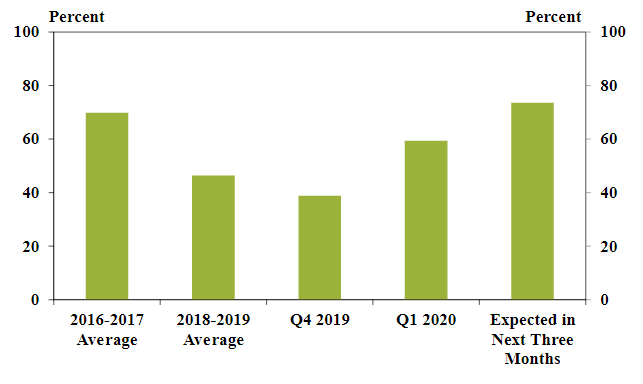 The latest survey, conducted in mid-March, captured banker concerns on several fronts. Figure 1 shows the share of banks reporting lower farm income. About 60 percent of the bankers said farm income in the first quarter this year was less than last year. Nearly 80 percent expected conditions to worsen in the second quarter.

Farmers are taking on more debt with bankers expecting greater demand for farm loans as the year progresses. Roughly 40 percent of the respondents reported a decline in loan repayment rates, the largest share since 2017. And again, the expectation is repayment rates will worsen in the second quarter.

More farmers are restructuring farm loans to meet operating expenses. District-wide, the Kansas City Federal Reserve found 15 percent of new agricultural loans involve restructuring to meet liquidity needs (Figure 2). Unfortunately, Nebraska led the district on this account with nearly 25 percent of the new agricultural loans involving restructuring. Among the seven states, only Nebraska and Oklahoma saw increases on this account. It is unclear why. Perhaps Nebraska’s more intensive beef production or irrigated crops require more capital and thus, restructuring. Or it could be bankers in Nebraska are more willing to restructure loans than their counterparts in other states.

If the first six months of 2020 are any indicator, 2020 will not go down as a banner year for agriculture. After the travails of last year, many farmers and ranchers couldn’t wait for 2020 to begin. In hindsight, the old saying, “be careful what you wish for” comes to mind. Yet Nebraska farmers and ranchers are resilient. Come what may, they will persist and emerge on the other side of the current financial struggles.