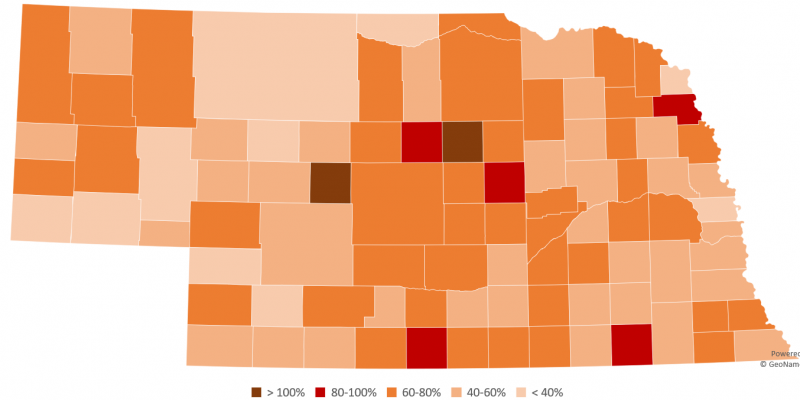 “Nothing is certain, except death and taxes.” This famous idiom is often attributed to Benjamin Franklin, but some people have also attributed it to Christopher Bullock or Edward Ward, also figures in the 1700s. Notwithstanding its source, for many Nebraskans the certainty of increasing property taxes is the most frustrating.

Property taxes fund local governments (i.e. schools, counties, community colleges, natural resources districts, etc.), thus, they are certain to be levied each year. And, because the costs of providing local services consistently increases each year, the amount of property taxes levied increases too.

Figure 1 maps the percentage changes in property taxes levied, including bonds and special levies, in counties between 2009-2019. Property taxes levied in most counties increased between 60-80 percent over the period, or roughly 6-8 percent per year. Two counties, Garfield and Logan, saw percentage increases exceed 100 percent. Another five counties saw increases between 80-100 percent. On the other end of the spectrum, 10 counties experienced increases of less than 40 percent. Why the differences? There doesn’t appear to be any common reason or geographical explanation. Local government spending decisions, differences in state and federal aid, unforeseen events or needs, population changes, and other factors all likely play a role.

While property taxes are a certainty like death, the effects of property taxes vary across property sectors and locations. This variety of impacts is reflective on the state’s reliance on local control and local services, but also reflective of differences in local property markets and economic growth. It’s also one of the reasons trying to structure a means of reducing property taxes is so complex and difficult.