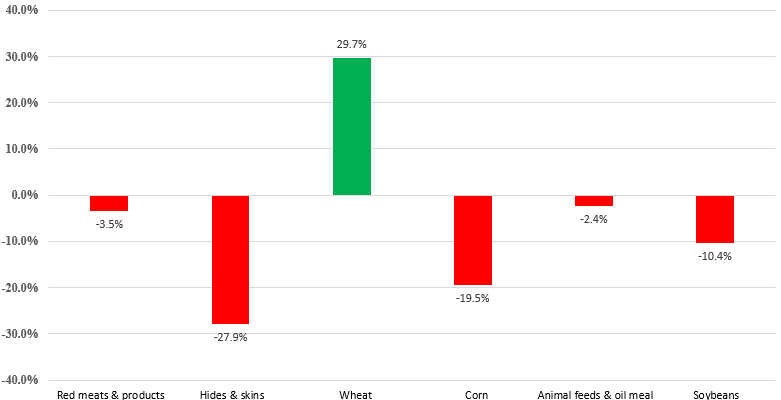 U.S exports of Nebraska commodities are not faring too well thus far in 2019. Nebraska’s top export commodities include soybeans, corn, beef, animal feeds (ddgs), pork, and hides & skins. Figure 1 compares U.S. export value of these commodities from January through May of this year to the same period last year.

Exports of red meat are down 3.5 percent this year compared to last year. Last year was an outstanding year for exports of both beef and pork, so to be only off 3.5 percent and basically holding steady isn’t too bad. This is especially true since U.S. products are now at a competitive disadvantage relative to competitors in several southeast Asian markets because the U.S. is not participating in the Comprehensive and Progressive Trans-Pacific Partnership (CPTPP). U.S. products, though, are likely missing opportunities for additional sales in these markets due to the lack of participation in the CPTPP. South Korea, with which the U.S. has a free trade agreement, continues to its increase its purchases of U.S. beef, partially offsetting export declines to other countries. Exports of hides and skins, important to Nebraska because of the packing industry, are also lower this year. China is the largest purchaser of U.S. hides and skins and its purchases are down.

Soybean exports are off again this year by more than 10 percent. And, this decline comes after a decline of 20 percent last year. The decline in soybean export sales can be traced directly to China as China is the world’s largest soybean importer. The retaliatory tariffs put in place by China on U.S. soybean exports has deflected purchases to other countries. Argentinian soybean exports are up 267 percent this year. In addition, China’s soybean purchases are less this year due to the outbreak of African Swine Fever reducing its hog herd and the need for feed.

Wheat is the one shining star this year among U.S. exports, up almost 30 percent compared to last year. Early concerns over production in other parts of the world and a growth in wheat use and consumption have helped boost U.S. exports.