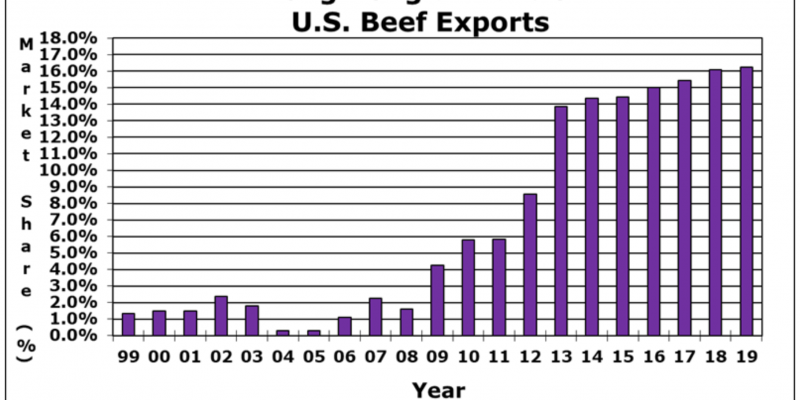 Relations between the U.S. and China have grown increasingly edgy in recent months. Recent events in Hong Kong have contributed to the edginess. Hong Kong is an important market for U.S. beef. Figure 1, created by the Dept. of Agricultural Economics at Kansas State University shows that since 2014, U.S. beef exports to Hong Kong have exceeded 14 percent of total U.S. beef exports on a carcass weight basis.

Tensions between U.S. and China reached a high last week when President Trump stripped Hong Kong of its preferential trading status. China quickly responded to the President’s move saying it would retaliate. President Trump’s action came after China imposed a new security law in Hong Kong beginning June 30. The law’s imposition is just the latest in a crackdown by the mainland government on pro-democracy efforts in the region. When Hong Kong gained independence from Britain in 1997, China agreed to allow it to self-govern under a “one country, two systems” policy. In recent years though Hong Kong’s autonomy under this policy has been whittled away as the mainland government seeks to impose its will.

The U.S. treats Hong Kong separately from mainland China in terms of its trade relations. It has maintained a preferential trading status with the territory for over two decades. Reuters reports that Hong Kong has a zero-tariff rate on imports of U.S. goods. In 2018, Hong Kong was the U.S. fourth-largest purchaser of beef, and seventh-largest market for all agricultural products. The impact on U.S. beef exports of the President’s move and the ratcheting tensions between the U.S. and China remains to be seen. However, any slowdown in sales to the territory will impact Nebraska beef producers. Nebraska consistently leads the nation in beef exports and because Hong Kong is a significant market, events halfway around the world could impact the pocketbooks of ranchers and feeders in the state. Nebraska beef producers need to stay tuned to events unfolding in Hong Kong. Their bottom line could be on the line.