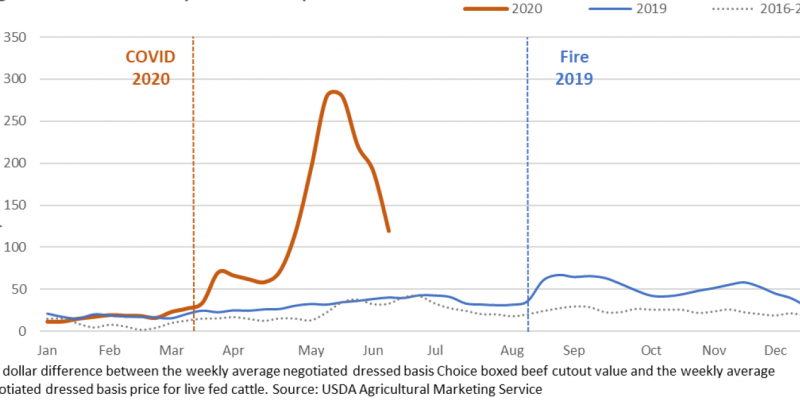 The USDA Agricultural Marketing Service (AMS) issued a report last week with the sexy title, “Boxed Beef & Fed Cattle Price Spread Investigation Report.” Don’t let the titillating title distract (although it makes economists drool), the report undertakes a thorough examination of the price movements in the boxed beef and fed cattle markets following the fire at the Tyson facility in Holcomb last year and the COVID-19 outbreak this year.

The report is part of investigations by the USDA into packer behavior following these events and whether any price manipulation, collusion, or other unfair practices occurred violating the Packers and Stockyards Act.

The concerns center around the widening of the spread between cutout and fed cattle prices following the fire and COVID-19. Figure 1 shows the average price spread between 2016-18, the price spread last year, and the spread through the middle of June this year. While the spread widened following the Holcomb fire, the change was minimal compared to what occurred in April following the shutdown of facilities due to COVID-19. According to the report, the spread grew from $66/cwt. to over $279/cwt. from early April until the second week of May, a 323 percent increase. The closing of processing facilities and reduced operating capacity resulted in less cattle being processed, off 36 percent compared to 2019. Fewer cattle processed led to lower cattle prices. At the same time, a surge in consumer demand, and the fear of short beef supplies due to the processing disruptions, pushed cutout prices higher. The divergent movements led to record spreads. The spread has declined but remains above the 2016-18 average. To further delve into the economic analysis in the report, go to: https://www.ams.usda.gov/sites/default/files/media/CattleandBeefPriceMarginReport.pdf

Nebraska Farm Bureau requested the USDA and the DOJ to launch investigations into whether violations to the Packers and Stockyards Act occurred. The AMS report indicates the USDA is continuing its investigation and has been engaged in discussions with DOJ but offers no findings. The waiting game continues.