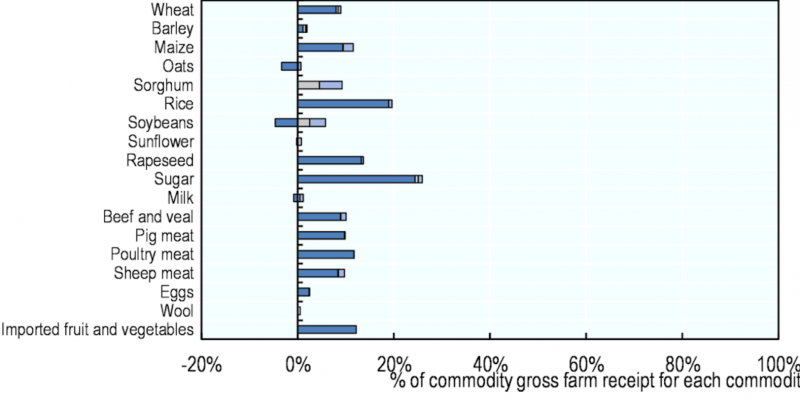 Total support to agriculture averaged $619 billion per year between 2017-19 across both rich and emerging countries. This nugget of information comes from a report by the Organization for Economic Cooperation and Development (OECD), an organization of 37 rich countries, on agricultural policy in 54 countries across the globe.

The report said 72 percent of the support was provided directly to producers and equaled 12 percent of gross farm receipts.

Agricultural support in OECD countries averaged $319 billion per year, while support in emerging countries equaled $295 billion. Support as a share of farm receipts, now 12 percent, is lowered compared to 2000-02 when it averaged 18.4 percent. The level of support provided U.S. producers is below the OECD average. As a share of gross farm receipts, support to U.S. producers equaled 11 percent and represented 0.5 percent of gross domestic product. Worldwide agricultural supports equaled 0.8 percent of gross domestic product.

Figure 2 shows the level of support across all 54 countries provided to individual commodities as a percentage of the commodity’s total receipts. The support is separated into three categories: market price support or measures to depress domestic prices for consumers (MPS); subsidies linked to output (payments based on output); and single commodity transfers (SCT). Sugar, rice, and grapeseed standout as receiving the most government support. Interestingly, policies for some commodities (i.e. oats) result in farmers being effectively taxed as governments seek to keep prices low for consumers. Sugar, milk, cotton, and sorghum are the most heavily supported commodities in the U.S.

Countries support producers and intervene in agricultural markets for many reasons. Agriculture is a sensitive area for governments as no country wants to see its citizens go unfed. The OECD report provides a sense of the level of support to agriculture and how the U.S. compares.

Figure 2. World Commodity Supports as a Percentage of Farm Receipts