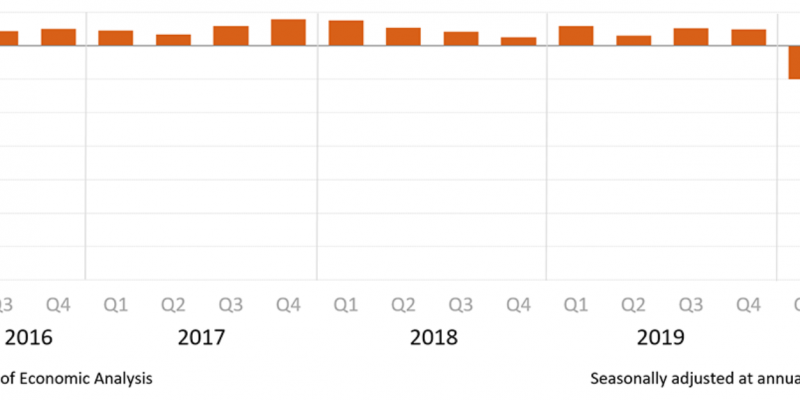 Not that confirmation was needed, but data released last week confirmed the U.S. economy is now in a COVID-19 induced recession. An economic recession is typically defined as two consecutive quarters of economic decline, generally measured by declines in gross domestic product (GDP).

The Bureau of Economic Analysis (BEA) reported last week that its “advance” estimate of real GDP (inflation adjusted) in the second quarter decreased at an annual rate of 33 percent. It was also reported first quarter real GDP decreased 5 percent. The BEA said the decline was reflected in decreases in personal consumption expenditures, led by decreases in spending on health care, clothing, and footwear. Consumer spending makes up 70 percent of the economic activity in the country. Interestingly, personal income increased $1.39 trillion in the second quarter compared to a first quarter increase of $193 billion. This is primarily due to support payments from the federal government.

While most folks were hoping for a “V” shaped economic recovery—rapid decline, rapid recovery—it now appears the recovery will take the shape of a “U” or a “W”— longer stay at the bottom then rebounding; or growth/decline in fits and starts. The recent resurgence of COVID-19 in several states has put the brakes on a quick economic uptick. Most economists expect the economy will shrink 5-10 percent this year. There are positives, housing sales are higher fueled by lower interest rates, and unemployment numbers have stabilized, but COVID-19 is too entrenched for a rapid recovery. For agriculture, while people still need food, food spending rises and falls with overall economic growth. And with the hotel and restaurant industry still limping along, and travel down, it’s doubtful domestic demand for food, fiber, and fuel will improve much this year.

Why Does the U.S. Import Beef?