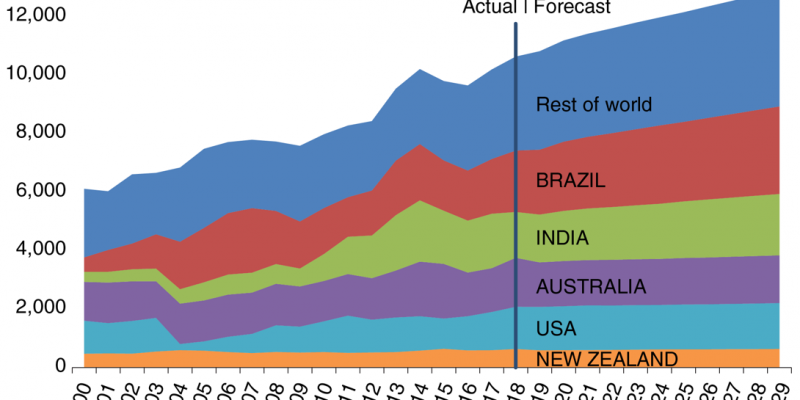 And, the title for the largest beef exporting country in the world, envelope please, goes to:  Brazil. U.S. exports of beef have been growing, up 15 percent in value in 2018, but Brazil last year provided close to 20 percent of total global beef exports according to the USDA Economic Research Service to lead the world. In comparison, the U.S. ranked fourth and represented 14 percent of the world’s exports. India and Australia rank second and third respectively.

The USDA projects Brazil will continue its export growth over the next decade, eventually accounting for 23 percent of the world’s beef exports in 2028. Most of Brazil’s beef, 44 percent, goes to China and Hong Kong and shipments to these destinations are expected to increase in 2019 and over the next decade. Brazilian beef currently has a competitive advantage into China relative to U.S. product because of the ongoing trade war between China and the U.S. Brazil is also the largest producer of halal meat which has allowed it to make inroads into Middle East and other predominantly Muslim markets. The Middle East is the third-largest importer of Brazilian beef. Growing Brazilian production, coupled with the devaluation of the Brazilian currency, the real, means it is poised to continue to be the major player in world beef markets.