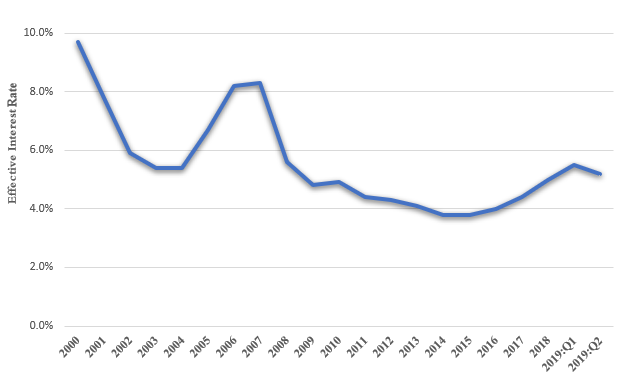 To no one’s surprise, the Federal Reserve Open Markets Committee voted last week to lower the federal funds interest rate by a quarter-point. The target range for the rate is now 2.0-2.25 percent. The reduction was the first since 2008. The surprise, if any, was that the reduction wasn’t more.

Many economists had predicted a reduction of one-half point. Reasons cited for the rate reduction included weak global economic growth and the ongoing trade war with China. An inflation rate stubbornly below the bank’s 2 percent goal also probably factored into the decision. The decision was not unanimous. Esther George, President of the Federal Reserve Bank in Kansas City, and one other committee member voted against the rate reduction.

People with savings do not like rate reductions; borrowers do because they could see lower interest costs. Farmers on the whole are borrowing larger amounts to finance their operations. According to data from the Federal Reserve Bank in Kansas City, roughly three-quarters of the non-real estate loans made to farmers by banks have floating interest rates. A lower federal funds rate, then, could translate into lower rates and interest costs on these loans. The Kansas City Federal Reserve reports the average effective interest rate on non-real estate loans to farmers in the second quarter of this year was 5.2 percent. And while higher than rates seen in 2014 or 2015, rates are still lower when compared to the early and mid-2000s when they hovered above 8 percent (Figure 1). Of the loans provided to farmers by commercial banks, 13 percent are for livestock, 55 percent for current operating expenses, 4 percent for machinery and equipment, and 10 percent are for real estate.