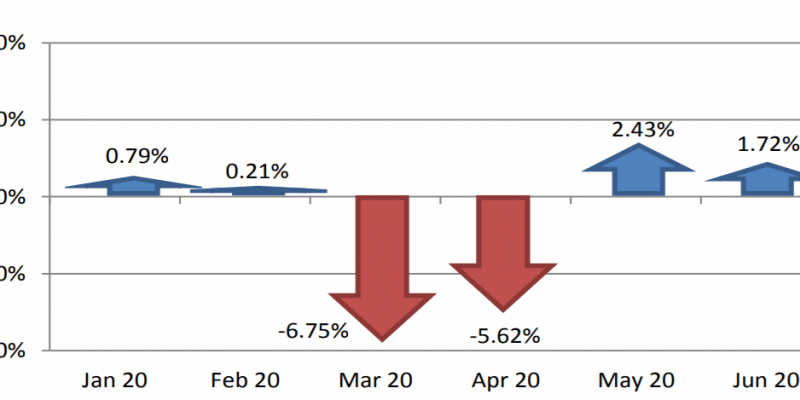 The Bureau of Business Research (BBR) Coincident Economic Indicator—which measures the current size of the Nebraska economy—fell by 0.10 percent in June. The June fall followed declines in March (-0.91 percent) and April (-5.33 percent), and an increase in May (0.71 percent). Thus far in 2020, the Nebraska economy has seen three months of expansion and three months of decline. Ernie Goss, professor at Creighton University, reports in the Nebraska rural economy is down by 14,000 jobs, or 4.9 percent from pre-COVID levels.

On the plus side, BBR’s Leading Economic Indicator rose 1.72 percent in June, which followed a 2.43 percent increase in May (Figure 1). The two consecutive increases followed two months of sharp declines in March and April. The indicator is designed to indicate where the Nebraska economy will be in six months. The positive reading indicates the economy will rebound in late 2020 and into early 2021. A drop in the value of the dollar, increased manufacturing hours, increased building permits for single-family homes, and positive business expectations were cited as contributors to the expected growth in the economy.

The Creighton University Rural Mainstreet Index created by Goss, increased in July, but it remains below growth neutral (Figure 2). The July index registered 44.1, up from June’s 37.9, and a marked improvement from April’s 12.1. An index of 50 is growth neutral. Goss’s survey of bank CEOs in rural areas in a 10-state region also indicated farm loan defaults would rise 5 percent over the next year. Goss also reported the July farm equipment-sales index, 34.4, increased in July from 32.8 in June but still represented the 82nd consecutive month the reading was below growth neutral.

Like the U.S. economy, the Nebraska economy has absorbed COVID-19 induced punches in recent months, although not as severe. The BBR indicator suggests growth will return this year, although the struggling agricultural sector continues to be a weight on the rural economy.