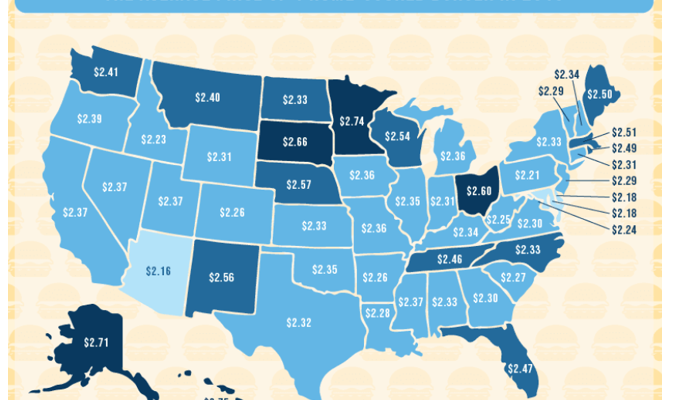 Ronald Reagan used to say that if the game Trivial Pursuit were designed by economists, it would have 100 questions and 3,000 answers. President Reagan’s quip is the title of a Tidbits feature called . . . “100 Questions and 3,000 Answers.”

Question: In reference to the chart on the cost of a hamburger in each state—how is it that Nebraska, “The Beef State”, is among the higher priced states?

Answer: The question references the map below created by the website Simple Thrifty Living. The map shows the average cost of a home-cooked hamburger in each state. The average cost of a burger in Nebraska, $2.57 per burger, was among the highest in the nation. There might be a couple explanations for the higher burger cost in Nebraska. First, the website includes other burger condiments like tomatoes, lettuce, onions, etc. in the comparison. It could be the cost of these ingredients, largely imported into the state, are driving up the overall cost of a hamburger in Nebraska. Second, Nebraska is known for producing higher-valued cuts of beef and must import trimmings or grinding beef to make hamburger. It could be these costs drive up burger costs as well. Either way, $2.57 per burger is still a good value for a summer cookout. Thanks to the Nebraska Beef Council for help in answering the question.