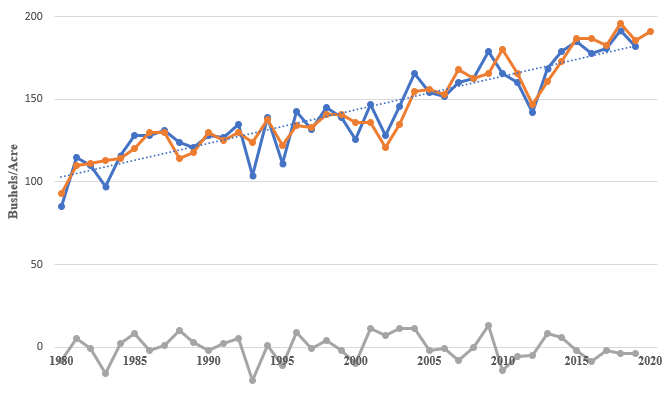 The USDA National Agricultural Statistics Service (NASS) released its August crop production forecasts last week based on August 1 conditions. Nationally, corn production is forecast at 15.3 billion bushels, a record high, up 12 percent from 2019. Soybean production is forecast at 4.42 billion bushels, up 25 percent. Of course, the forecasts were compiled prior to the “derecho” pummeling Iowa and other areas of the corn belt last week.

Reports have said 1/3 of Iowa’s corn and soybean crop was impacted by the storm, or 10 million acres, and perhaps 16 million acres nationwide. So, the national forecasts need to be considered with a grain of salt considering the circumstances.

For Nebraska, the NASS forecast the average statewide corn yield at 186 bushels per acre and total production at 1.8 billion bushels, up 1 percent compared to last year. Production is projected higher even though harvested acres are projected to be below last year’s by 4 percent. Soybean yield in Nebraska is pegged at 58 bushels per acre with total production at 307 million bushels, up 8 percent. Soybean harvested acres are projected to be 2 percent higher this year.

Figure 2 depicts the same data over the same period for soybean yields. The differences between actual yields and the August estimates as a percent of actual yields averaged 1.23 percent, meaning USDA estimates tend to underestimate yields by 0.84 bushels per acre. Thus, the USDA August soybean yield estimates, while accurate, are not quite as pinpoint as the corn estimates, but then again, there are times when the USDA nailed yield perfectly.

The USDA production forecasts include many other crops. Projections for other Nebraska crops are: sorghum production, 11.2 million bushels, down 8 percent; dry edible beans, 2.90 million cwt., up 54 percent; sugar beets, up 39 percent; alfalfa hay, up 5 percent; and all other hay, up 17 percent. The growing season has few weeks to go yet, so things can change, but the USDA forecasts suggest good crops for Nebraska producers this year.