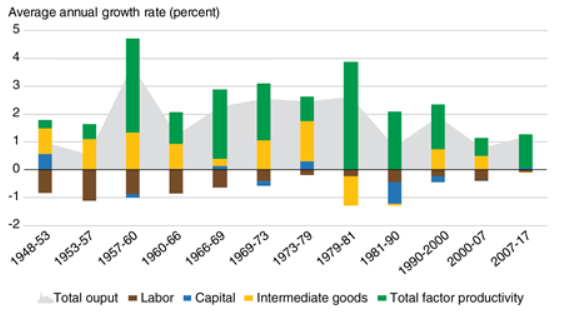 Figure 2 plots the percentage changes in output, productivity, and the contributions to growth of various inputs since 1948. The shaded grey area illustrates total farm output growth. The green bars represent the contribution of productivity growth to output growth. The other colors represent the contribution to output growth of labor, capital, and intermediate goods (seed, chemicals, feed, etc.). According to the ERS, aggregate input use increased 0.07 percent annually since 1948, but as mentioned above, total output grew 1.53 percent on average. Thus, the growth in output over the years was due primarily to productivity growth which grew at an average of 1.46 percent each year.

As Figure 2 shows, total output growth varies. It was consistently above 2 percent between 1966 to 1981. Since then, it has waned. This is due partly to less productivity growth since 2000. Productivity growth averaged 0.6 percent between 2000-2007 and 1.21 percent in 2007-17. Figure 2 also shows how the contribution to output of various inputs has changed. Labor inputs had a negative effect on output growth (-0.45 percentage points), as did land and other capital inputs (-0.06 percentage points). In contrast, the use of seed, chemicals, feed, etc. contributed 0.58 percentage points to output growth. This is reflective of the use of these inputs. The ERS says that over the last 70 years, the use of intermediate goods increased by more than 130 percent while labor employed declined by 76 percent and the amount of land used declined by more than 25 percent.

U.S. agriculture output growth is keyed by productivity growth. Given the constraints being placed on agriculture to use less land, chemicals, water, and other inputs, continued productivity growth will be necessary for continued output growth. Innovations in genetics, equipment, farm management, and chemicals will be a must. This will only come to fruition with increased private and public funding for research.