The Nebraska Farm Bureau, on behalf of the Agriculture Leaders Working Group, has filed an amicus brief in support of the state’s long-standing signature requirements for ballot initiatives.

“To put an end to the constitutional requirements that signatures for ballot measures need to be gathered from 5% of the voters in 38 counties is a dangerous precedent to make,” said Mark McHargue, president of the Nebraska Farm Bureau. “This alarming proposal essentially silences the rural voice, and that is NOT acceptable. Nebraska agriculture is responsible for more than one-third of our state’s economic output or business receipts and nearly 1 in 4 jobs are directly and indirectly related to agriculture. Ending this requirement would consolidate political power to urban cities of Nebraska. This proposal does not represent ALL Nebraskans.”

In May, the ACLU of Nebraska and Nebraskans for Medical Marijuana filed a lawsuit alleging that the state’s signature requirements to get on the ballot are unconstitutional and in June a federal judge agreed, issuing a stay that ordered the Nebraska Secretary of State to not enforce the 38-county rule. In July, the U.S. 8th Circuit Court of Appeals issued a stay on the lower court’s injunction, reinstating enforcement of the signature requirement, prompting an appeal by the ACLU and NMM. The Court of Appeals is expected to render a decision on the latest appeal soon based on all briefs submitted.

“While not taking a position on the Nebraskans for Medical Marijuana ballot measure itself, the lawsuit filed with respect to that measure would sweep the rural vote under the rug. Changing the signature requirements in Nebraska could essentially open the door to endless ballot initiatives from outside groups that could threaten farm and ranch families across the state,” said McHargue.

Nebraska requires that a referendum needs signatures from at least 5% of registered voters in 38 out of the state’s 93 counties to get on the ballot. The Agriculture Leaders Working Group is concerned changing signature requirements for getting an issue on the ballot would essentially suppress rural Nebraska’s voice, and strengthen political power to urban cities of Nebraska. 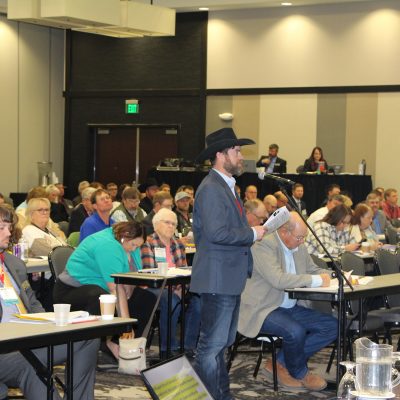