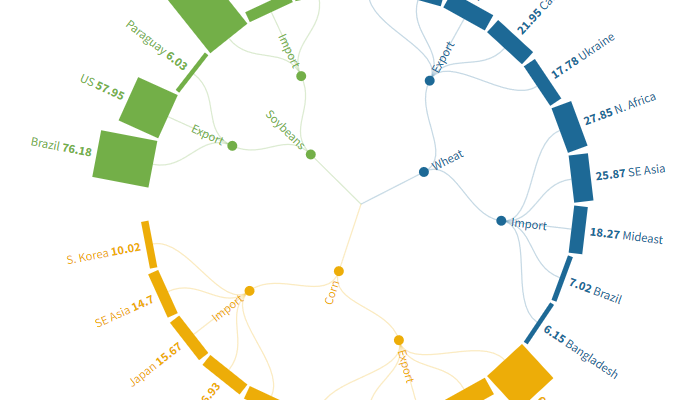 United States agriculture operates in a global marketplace and faces stiff competition in overseas markets. In some markets, the U.S. competes well and has secured sizable market shares. In others, stiff competition, the value of the dollar, and other non-market factors keep U.S. market shares low.

To get a sense of how U.S. and Nebraska agriculture fare in world markets, U.S. exports and imports of key Nebraska commodities, soybeans, corn, wheat, and beef and pork products, were analyzed in the context of total world markets.

Figure 1 shows the world’s top importing and exporting countries for corn, soybeans, and wheat in marketing year 2017-18. The commodities are listed in the middle of the wheel. Imports and exports then spoke out from each commodity with the countries and volumes for each country listed on the edge of the wheel. For example, in exports of wheat, Russia topped the world with exports of 41.42 MMT while the U.S. exported 24.52 MMT. To get more insight into individual commodity market and explore the graphics further, go to: https://public.flourish.studio/visualisation/541163/. Once at the site, hover over a country to get more information on exports or imports of that country. Hover over a colored dot associated with a commodity and a box will show the total volume of exports or imports by the top countries. Click on a commodity dot and the graph will narrow and focus only on that commodity. Click on either the export or import dots for a commodity and the graph will narrow further to focus on either of these items. Click on the arrow in the upper right of the screen to return to the previous graph.

Figure 2 shows the world’s top importing and exporting countries for beef and pork products. Like the previous graph, the commodities are listed in the middle of the wheel. Imports and exports then spoke out from each commodity with the countries and volumes for each country listed on the edge. For example, in imports of beef the U.S. is second only to China in terms of the tonnage of beef imported, 1.36 MMT compared to 1.47 MMT. To delve deeper, go to: https://public.flourish.studio/visualisation/644754/. The instructions on maneuvering around the graphics are the same as above.

Foreign competition, economics, and political disputes have all play a role in determining U.S. market share in world commodity markets. As the graphics above depict, competition for imports of commodities produced in Nebraska remains fierce. It is important for the U.S. and Nebraska to remain vigilant in protecting existing markets and pursuing new ones.

What’s on the Horizon for International Trade?