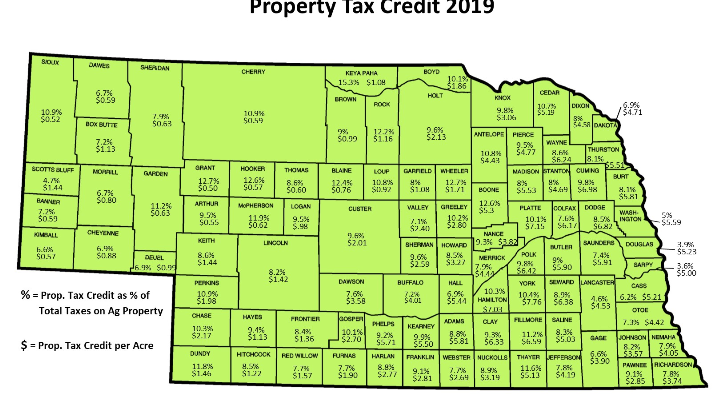 The Nebraska Department of Revenue announced the property tax credit on agricultural land in 2019 will amount to roughly $116 million statewide, or $2.52 per acre on average. Non-agland property will receive a credit equaling almost $159 million.

The credit applies to taxes levied on all real property, but not personal property. The total credit amount provided this year, $275 million, is greater than that distributed last year, $224 million. The boost in dollars was included in the latest state budget passed by the Legislature and signed by the Governor.

In percentage terms, the 2019 credit averages 8.6 percent of the total property taxes levied on agricultural property in 2018. Agricultural property owners in Keya Paha County will receive a reduction in taxes equal to 15 percent of 2018 taxes paid Property owners in Boone, Grant, Hooker, and Wheeler will receive a credit equaling almost13 percent of 2018 taxes paid. In Douglas and Lancaster counties the credit will equal approximately 4 percent and 5 percent respectively of overall taxes levied. The percentages in these counties are skewed somewhat lower due to the taxes paid in these counties to municipalities and sanitation improvement districts compared to less populated counties.

The map below plots the credit as a percentage of 2018 taxes paid on agricultural property and the average agricultural land credit per acre across the state.