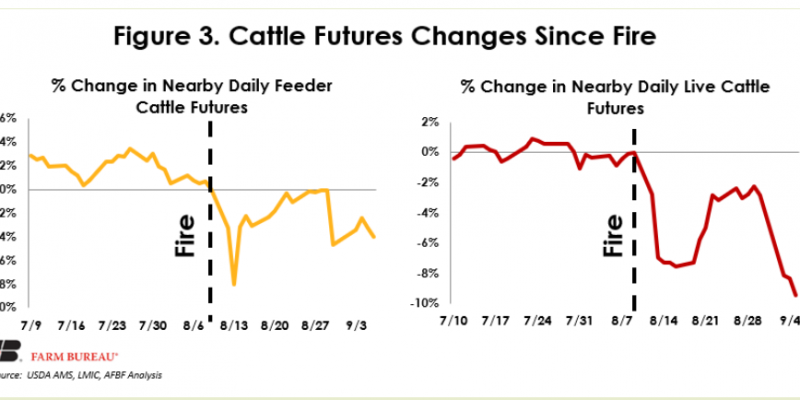 Price movements in both cattle and boxed beef markets (Figures 2 & 3) following the fire at the Tyson processing facility in Holcomb, KS have sparked considerable discussion within the beef industry. In the wake of the fire, packers’ gross margins reached record levels as boxed beef prices soared and cattle prices fell.

Many cattle producers have expressed concerns that packers took advantage of the fire to manipulate markets. In response to these concerns, the USDA announced the Packers and Stockyards division would launch an investigation “into recent beef pricing margins to determine if there is any evidence of price manipulation, collusion, restrictions of competition, or other practices.” Nebraska Farm Bureau sent a letter to the USDA encouraging them to closely monitor the situation for any wrongdoings.

American Farm Bureau economist Michael Nepveux recently released an analysis looking at what economic theory might suggest regarding the price movements following the fire. In a nutshell, theory suggests boxed beef prices would increase due to concerns with supply. At the same time, it suggests cattle prices would fall given concerns over the demand for cattle as a result reduced processing capacity. However, in this instance, not all the conditions were met to satisfy the confines of economic theory. Nepveux also outlines these conditions and why questions are being raised.

After the fire at the Holcomb facility, both the beef and cattle markets saw significant price movements, which led to historic gross margins for those involved in the beef packing industry. Much of this movement is right in line with what one would expect under these conditions, with the prices being driven by shifts in the demand curve for fed cattle and the supply curve for wholesale beef. However, a key assumption in these predictions is that actual slaughter numbers will fall relatively in line with the closed plant. Instead, we saw small decreases the following week, along with a small increase the second week after the fire as beef packers expanded weekend shifts to capture the additional margin being offered by the market. . .

Nepveux’s analysis can be found at: https://www.fb.org/market-intel/impacts-of-the-packing-plant-fire-in-kansas. It’s worth the read. Markets, fearing the worst, often overreact to events. The USDA investigation will help determine if that was the case in this instance or whether more was involved. Market participants need to be assured that no manipulation occurred.

Could A 59-Year Streak Be Over?