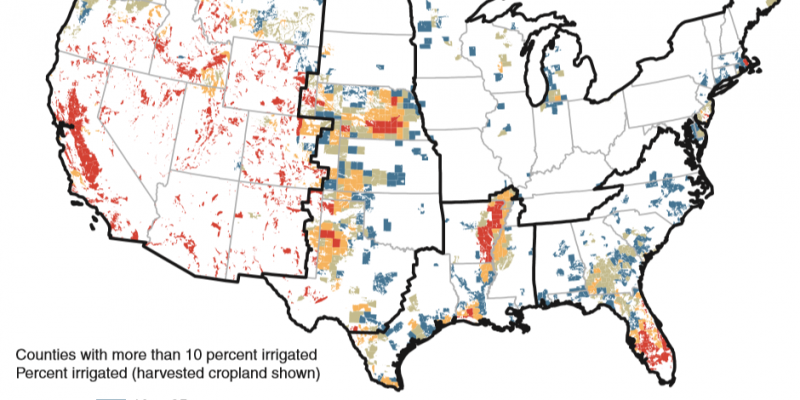 Nebraska agriculture would look vastly different and would not be the economic power it is absent irrigation. Sometimes, though, it’s good to be reminded of the breadth of irrigation in the state relative to the rest of the nation.

Nebraska has several counties colored red, but what is striking about Nebraska is not the number of counties colored red, but the breadth of irrigated acres across the state compared to other states. Most Nebraska counties have at least 25 percent of their harvested acres under irrigation. Only a few counties in southeastern Nebraska and a few in the sandhills do not meet the 10 percent threshold to be colored on the map. No other state comes close to having the broad distribution of irrigated acres like Nebraska.

Nebraska leads the nation in the number of irrigated acres, exceeding eight million. Nebraska’s irrigated land base contributes to greater production and has helped the state grow sizeable animal feeding, ethanol, seed corn, irrigation equipment, and popcorn industries. Without irrigation, the economic footprint of these and other agricultural industries would not be near as large.

Source: USDA ERS calculations based on data from USDA, NASS Census of Agriculture