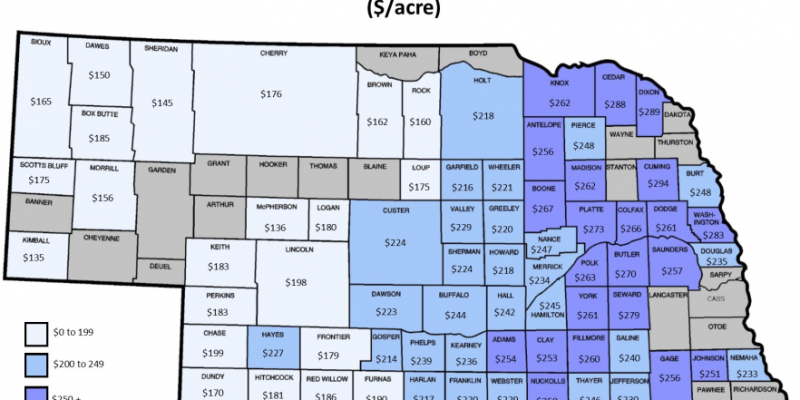 However, it lost its chance at the Triple Crown with average rents on pasture of $72/acre, third behind Wayne County ($81/acre) and Colfax County ($74/acre). Dixon and Cedar Counties were close behind Cuming County on rents on irrigated ground, both with rents near $290/acre. Dakota and Thurston Counties followed Cuming County on rents for dryland cropland with rents of $240/acre and $233/acre, respectively.

Northeast Nebraska generally had the highest average rental rates in 2019, like it did in 2017. However, cash rents on cropland this year were less compared to 2017. The top cash rent on irrigated ground in 2017 was $312/acre in Dixon County. The top rate in 2019 was almost 6 percent less than that. The top average cash rent on dryland ground this year, $244/acre, was $22/acre less compared to 2017, or just over 8 percent. The drops in rental rates are reflective of the ongoing struggles for positive returns in the crop sector. They are also similar in percentage terms to the declines seen in land values over the past few years. Somewhat surprising, the top rental rate for pasture ground this year was higher compared to 2017 by $8/acre or 11 percent. Cattle numbers have grown in recent years and the uptick in pasture rental ground might have resulted from more competition for pasture.

The maps below list average cash rental rates for irrigated cropland, dryland cropland, and pasture ground by county across the state. The data comes from surveys of Nebraska farmers and ranchers conducted by the USDA National Agricultural Statistics Service. The agency conducts the survey every two years. Counties colored grey are ones where data was unavailable. To see how 2019 cash rents compare to 2017 rents, the 2017 maps can be found here: https://cropwatch.unl.edu/2017/usda-nass-numbers-whos-paying-how-much-cash-rents.

To compare Nebraska cash rents to other states, go to: https://www.fb.org/market-intel/reviewing-2019-county-level-cash-rents.

Nebraska Corn Production Up, Soybeans Down