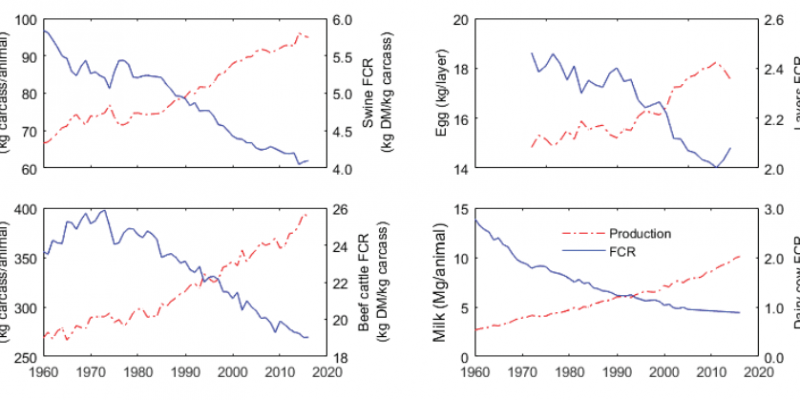 According to the report, livestock output in Nebraska between 1960 and 2016 increased 4.9 times for beef, 2.8 times for pork, but declined 30 percent for milk products. Productivity improvements, though, meant the associated animal feed requirement increased only 2.5 times. Meat production per animal increased 46 percent for cattle, 42 percent for swine, and milk production per cow increased a whopping 380 percent. At the same time the feed conversion ratio, the ratio of feed consumed to output, declined across all species (Figure 2). In other words, fewer animals today are needed to produce the same amount of meat as was produced in 1960.

Accordingly, the WP of livestock products in Nebraska increased considerably between 1960 and 2016. The report states, “The largest increase was for dairy milk, which rose 5.1 times, followed by pork, which rose 3.8 times from 1960 to 2016. During the same period, poultry products (chicken and turkey meat) and beef WP increased 3.5 times and 1.8 times, respectively.” The report also examined the WP of beef in Nebraska compared to other states and found it is 21 percent larger than the WP in Texas and Kansas, but 23 percent less than California. Higher yields for forage feeds in California results in its higher WP for beef.

Consumers are asking agriculture to be more sustainable. The Daughterty Water for Food Institute report provides evidence that agriculture is meeting this goal. For more information, go to https://waterforfood.nebraska.edu/-/media/projects/dwfi/resource-documents/reports-and-working-papers/nebraska-water-productivity-report.pdf.