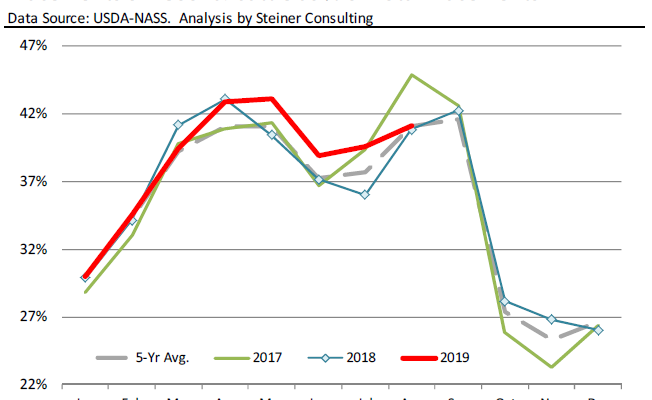 The Daily Livestock Report (DLM) reported last week the price spreads between choice and select cuts of beef have widened significantly this year compared to recent years. A factor contributing to the widening spread according to the DLM is fewer cattle are going to packers which grade choice.

The percentage of choice grading cattle is off 1.5 points from last year and 3.5 points compared to two years ago. This means choice supplies are relatively tighter this year leading to a bigger spread between choice and select cuts. DLM says time on feed may impact grading percentage, “placing cattle on feed at heavier weights, and thus keeping them on feed for a shorter time, may have contributed to the current grading situation.”

The previous item noted research which has shown cattle placed into Nebraska feedlots are trending heavier over time. DLM suggests heavier placement weights may be contributing to lower grading cattle. Taking the two pieces of information together raises the question whether the trend toward heavier weight placements in Nebraska is contributing to the decline in the percentage of cattle grading choice. More analysis would need to be conducted to answer the question, but it does make one ponder.