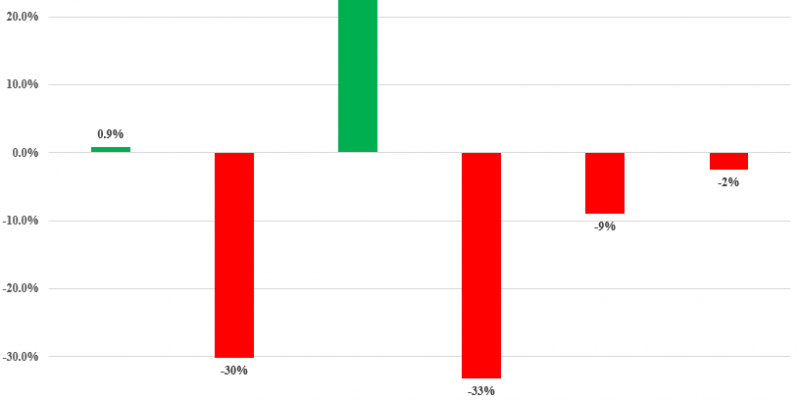 U.S exports of commodities produced in Nebraska continue to lag in 2019 compared to 2018 according to the latest data from the USDA Economic Research Service. Nebraska’s top export commodities include soybeans, corn, beef, animal feeds (ddgs.), pork, wheat, and hides and skins. Figure 1 compares U.S. export value of these commodities from January through August of this year to the same period last year.

The bright spots this year for exports of importance to Nebraska are red meat and wheat. Red meat exports are up slightly, 0.9 percent, basically holding their own compared to last year. Considering the competition issues facing U.S. meat exports this year, maintaining last year’s export level is good. Since the beginning of the year U.S. meat products have been at a competitive disadvantage in several southeast Asian markets because the U.S. is not a participant in the Comprehensive and Progressive Trans-Pacific Partnership (CPTPP). Thus, exports from competing countries participating in the partnership have an advantage. The recent agreement with Japan should help overcome some of these issues, at least as they relate to Japan, and hopefully boost red meat exports. Right now, the volume of U.S. beef exports thus far to Japan are 10 percent less this year compared to last.

A positive for the year has been the growth in pork exports. The USDA projects total pork exports to be 12 percent higher in 2019 compared to 2018. Growing demand in South Korea and China is driving the larger overseas pork purchases. Wheat is the other shining star among U.S. exports, up 24 percent compared to last year. Production concerns in other parts of the world and a growing world demand have helped boost U.S. exports.

Exports of other major Nebraska commodities are not faring as well. Exports of hides and skins, important to Nebraska because of the packing industry, are 30 percent less than last year. China is the largest purchaser of U.S. hides and skins and its purchases are down due to the trade dispute with the U.S. and competition from substitutes. Overseas sales of corn are also down 33 percent compared to this point last year. Competition from South America has reduced the U.S. export share of the world exports. And, soybean exports are off by 2 percent. This year’s decline is on top of the loss of 20 percent last year due to the dispute with China.