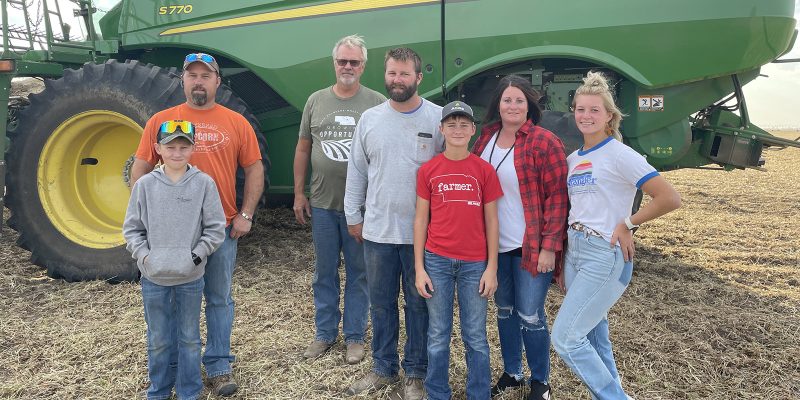 Combines are rolling on Shane Greving’s family farm near Chapman, and harvest is in full swing. Shane, along with his brother, father and an uncle, is the third generation to work the land his grandparents first started farming in 1958.

“I basically lived here my whole life. The original homestead that grandma and grandpa bought when they moved up here is just a couple of miles away. Growing up as a kid, my brother and I were always outside, helping and doing stuff. I guess we just fell in love with it. Then, it used to be fun and enjoyable. Now, it’s a lot more stressful,” Shane said.

Shane, a Merrick County Farm Bureau member, says the investment he makes to grow food, fiber and fuel for the nation keeps getting higher and higher. After a year of rising input costs, the last thing he wants to think about is an enormous capital-gains tax bill. For him, preserving stepped-up basis means the long-term sustainability of his farming business.

“My ultimate goal is to keep passing it on to the generation. I think when my grandpa started up here, that was kind of his plan. And my dad is the same way. He’s planning on passing it onto me and my brother,” Shane said.

Shane’s father, Greg, started his farming career in 1972 while just a freshman in high school. He brought his first piece of land, 23 acres to grow corn, just before graduating high school. If the Greving family did not have access to stepped-up basis, that 23 acres which has been in the family for 45 years, may have to be sold to pay taxes, ultimately cutting into the bottom line and the amount of crops the farm could produce.

While the current version of the reconciliation package does not include the elimination of stepped-up basis, Farm Bureau remains concerned that lawmakers might still include it in a final package. Some lawmakers have called to create a new exemption if the farm or ranch “stays in the family,” however, proving a family qualifies for the exemptions takes accountants and lawyers, which means additional costs.

“I’m afraid that if this elimination of stepped-up basis comes about, the expense that we’re going to incur is going to be astronomical because you’re going to have a lot of professional people that are going to be doing a lot of work for you,” Greg said. “We’re just starting to work though transition because I lost my father a year ago in June. Hopefully we do have a good team working for us now, as far as an accountant and lawyers, but just the stress of knowing that there’s going to be taxes paid and whenever there’s taxes paid, what does it do for you?”

Thinking about the number of acres it takes to support not only his family, but four other families with the farm, is a stress Shane carries in the back of his mind while hauling grain with his 13-year-old son, Braiden, by his side.

“I like being able to help out. I like to learn more about farming. I like to be with my dad all the time, and I think the younger I am and the more things I get to do on the farm, then I will know more when I’m his age,” Braiden said.

Braiden hopes to be the fourth generation to work the same land his great grandfather began farming 63 years ago.

The Grevings know, eliminating stepped-up basis would lead to more consolidation of farms. Small, family-owned farms could be forced out of business because of the tax liability. Preserving stepped-up basis means their farm continues and their children get to live out their dreams.

Schuyler Teacher Surprised with Teacher of the Year Award