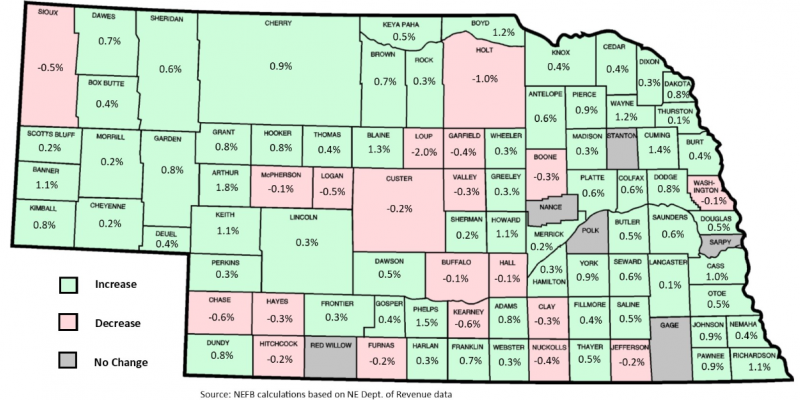 Statewide, credits applied to agricultural property were $4.5 million greater in 2020 compared to 2017. The increase, though, doesn’t tell the entire story. The Legislature appropriated an additional $51 million to the program beginning in 2019, raising the total credits distributed from $224 million to $275 million. With the increased funding, credits on agricultural land rose to $116 million in 2019, but then dropped to $109 million this year. Because the credits are distributed based on values, the decline in credits for agricultural property is the result of valuation changes between 2019 and 2020. Agricultural land values have been declining, while all other real property sector values have been growing.

Changes in the effectiveness of the credit in reducing taxes over time can also be monitored. The effectiveness can be measured by the ratio of the credit amount to taxes levied. For agricultural property, the ratio ranges between 6-12 percent across counties this tax year. Ideally, taxpayers want the ratio to increase over time, or at least remain stable, indicating the credit is offsetting or matching the growth in taxes. This hasn’t been the experience for all taxpayers. Agricultural taxpayers in 20 counties saw reductions in the ratio between 2017 and 2020 (Figure 1). The reductions ranged from 0.1 percentage points to 2.0 percentage points with Loup and Holt Counties showing the greatest declines in the ratio. Twelve of these counties were part of the 27 counties with losses in credit dollars (discussed above) which probably explains the lower ratios. However, eight counties did not experience a decline in credit dollars suggesting the growth in taxes levied on agricultural land outpaced the increase in credit dollars.

Source: NEFB calculations based on Nebraska Department of Revenue data