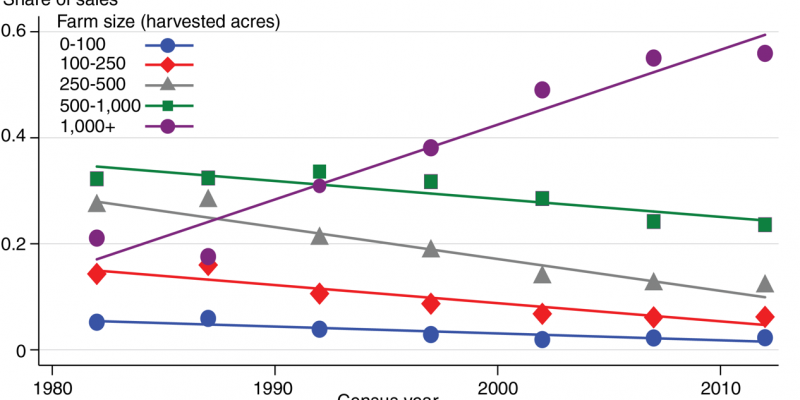 The consolidation has been driven by productivity advantages enjoyed by larger farms. In economics this phenomenon is known as “economies of scale.” Economies of scale means the cost of producing an additional unit of output decreases as the scale of production increases. The productivity advantages enjoyed by larger farms lead to lower per unit costs compared to smaller farms, and in turn, greater returns. Thus, the incentive to grow larger.

Researchers at the USDA Economic Research Service examined how productivity varies by farm size on crop farms in nine agricultural states including Nebraska. Figure 1 shows how the percentage of total farm sales grew over time for farms of greater than 1,000 acres and declined for farms with less than 1,000 acres. The research showed that productivity increased with farm size and the per unit cost of production declined. USDA researchers also found the productivity gap has widened over time. In other words, the pace of productivity gains on larger farms outpaced that on smaller farms. This widening gap helped contribute to growth of larger operations.