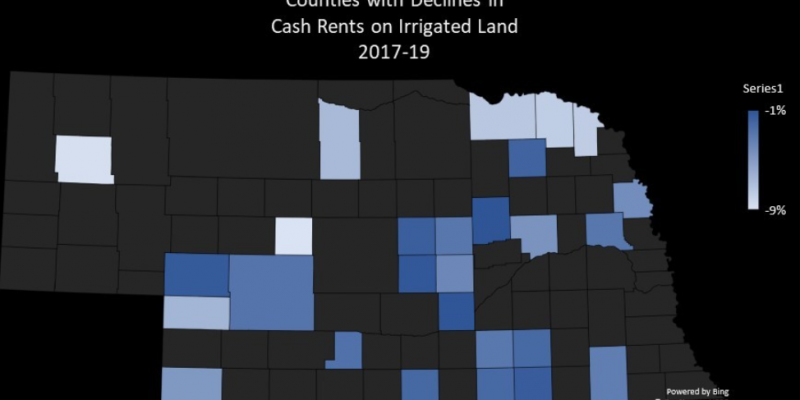 Tidbits highlighted the latest cash rent data for Nebraska a few weeks ago, but one story on cash rents just doesn’t do the topic justice. This week, changes in rental rates between 2017 to 2019 across Nebraska counties are highlighted.

The data comes from surveys of Nebraska farmers and ranchers conducted by the USDA National Agricultural Statistics Services. Maps showing rental rate increases and decreases between 2017 and 2019 for irrigated, dryland, and pasture ground can be found at: https://www.nefb.org/cashrentmaps. As an example of the information on the link, the map below shows counties with decreases in rent on irrigated land between 2017 and 2019. In total, there are six maps on the link—two for each land category.

The highest rent on irrigated land in 2017 was in Dixon County at $312/acre, almost 6 percent more than the highest rate this year, $294/acre in Cuming County. Twenty-seven counties saw average cash rents on irrigated land decline between 2017 and 2019; thirty-eight counties saw either no change or increases in rents. The greatest increase in rents occurred in Kimball County, up 21 percent. The greatest decrease in rents occurred in Logan County, down 9 percent. No geographical patterns stand out regarding the increases or decreases in rents, although it appears the greatest decreases occurred in a scattering of counties at or near Nebraska’s border with South Dakota. Otherwise, counties with rent increases and decreases were scattered across the state.

The top cash rent on dryland in 2019, $244/acre, was $22/acre less compared to 2017. Average rents on dryland were lower in thirty-four counties, with Dixon and Adams Counties both experiencing the largest declines, 12 percent. Counties experiencing declines tended to be in the northeast, south central, and southeast regions of the state. Thirty-eight counties either saw no change in cash rents or experienced an increase. Howard County experienced the largest increase, 16 percent. Counties with no change or increases in rental rates were primarily centered in a band along I-80 and in the southwest region.

The top rental rate on pasture this year was higher compared to 2017 by $8/acre. Thirty-three counties experienced decreases in rents and were concentrated in the southeast, northeast, and northwest regions with a cluster in central Nebraska including Buffalo, Custer, and Lincoln Counties. The largest decline in rents occurred in Merrick County, down 15 percent. Forty-six counties saw either no change or increases in rents and were primarily centered in east central Nebraska and in a circle surrounding the cluster of counties with declines in central Nebraska. The largest increase in pasture rent occurred in York County at 33 percent.

In summary, the decline in the top rents on irrigated and dryland ground between 2017 and 2019 is to be expected given crop producers’ struggles to generate positive returns. The struggles have taken the top off both markets in recent years as producers are looking for ways to cut costs. However, it should be noted, more counties experienced either increases or no change in average cash rents on irrigated and dryland ground between 2017 and 2019 than experienced declines, suggesting a stability underlying these markets. The increase in the top rate for pasture ground and the greater number of counties seeing increases in pasture rent could be the result of growing cattle numbers and greater competition for pasture. Finally, it appears local market conditions were driving changes to rents between 2017 and 2019 rather than the overall farm conditions or geographic differences between certain regions of the state.