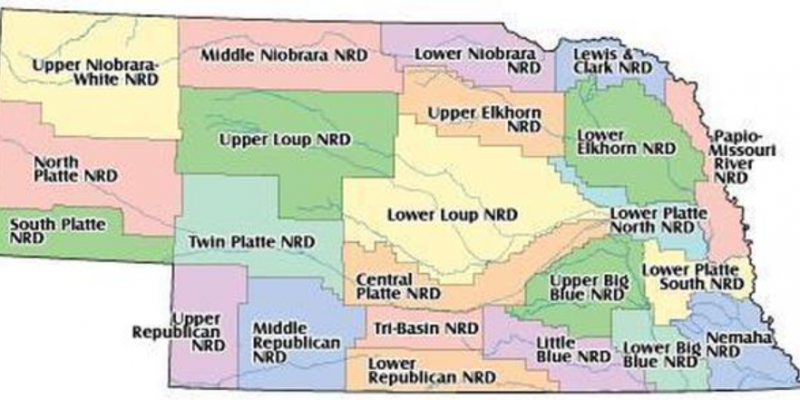 A voluntary groundwater conservation program launched this year by the Tri-Basin Natural Resources District (TBNRD) seeks to use financial incentives to encourage irrigators to conserve water. In the program, the TBNRD will pay irrigators who enroll for a portion of water saved.

In turn, landowners agree to abide by voluntary water allocations over a 5-year period equal to the UNL average corn crop consumptive irrigation requirement for the county in which the land is located. The TBNRD covers Gosper, Phelps, and Kearney Counties in south-central Nebraska. The goal of the program is to reduce groundwater pumping and increase irrigation water use efficiency in the district.

Acre-inch credits are earned by landowners when actual water pumped is less than the pumping allocation for the year (one-fifth of the 5-year allocation). Landowners have two options to collect NRD payments. Under an annual option, the NRD pays the landowner $5 per acre-inch for one acre-inch of credit earned each year. If the landowner exceeds the allocation for the year, he/she forgoes a payment for the year. The second payment option is to receive a payment at the end of the 5-year period equal to $4 per acre-inch for up to 5 acre-inches of credits earned over the entire period. Under either option, at the end of the 5-year period landowners cannot exceed the overall allocation. Landowners who pump in excess of the allocation would need to purchase credits from other participants to eliminate the deficit or not irrigate a parcel for a certain period. TBNRD will maintain an “electronic bulletin board” to facilitate connections between buyers and sellers and transactions must be approved by the NRD board. More details on the TBNRD program can be found at www.tribasinnrd.org.

At least one other NRD has implemented a program like the TBNRD program and its likely other NRDs are monitoring the programs for their effectiveness in meeting the districts’ goals. For landowners, the decision whether to enroll in such programs should be based on the value of the use of water in irrigation compared to the value of the payments received for not pumping. Landowners should ask themselves several questions when thinking about enrolling:

A landowner’s decision whether to enroll will ultimately depend on whether the expected value of a credit earned by using less water will exceed the expected value of applying the water to the crop. If so, it would economically benefit the landowner to participate. The program is intriguing in that it’s attempting to use financial incentives rather than regulation to meet the district’s water conservation goals. At the same time, its offering landowners a value for water as an alternative to the use of water applied in irrigation.