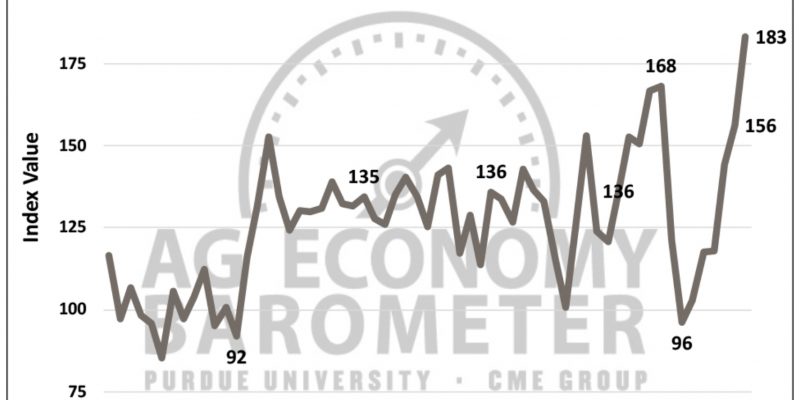 The resiliency of farmers and ranchers is unmatched. As evidence, the Purdue University-CME Group Ag Economy Barometer reached a record-high reading of 183 in October, a 27-point increase over September (Figure 1). The latest nationwide survey of 400 agricultural producers showed producer sentiment has improvided dramatically from a reading of 96 recorded earlier this year.

The latest survey was taken in mid-October as producers were in the midst of harvest. Producers’ sentiments improved for both current economic conditions (12 months into future) and future conditions (5 years into future). The index of current conditions registered 178 and the index of future expectations registered 186. The overall index compares producers’ current sentiments relative to October 2015. Readings above 100 indicate producers are more positive relative to October 2015. Readings below 100 mean they are less positive.

Researchers at Purdue attribute the jump in producer optimism to the late summer/fall rally in commodity prices along with the second round of Coronavirus Food Assistance Program (CFAP2) payments. The researchers say, “The combination of good yields and rallying crop prices set the stage for an additional boost in farmer sentiment.” Moreover, 25 percent of survey respondents said, “their farm was better off financially now than at the same time last year.” This is the highest level since the survey began in the fall of 2015. Producers’ optimism carries over into land markets too. More respondents in October, 27 percent, expected higher land values in the near-term, up from 23 percent in September.