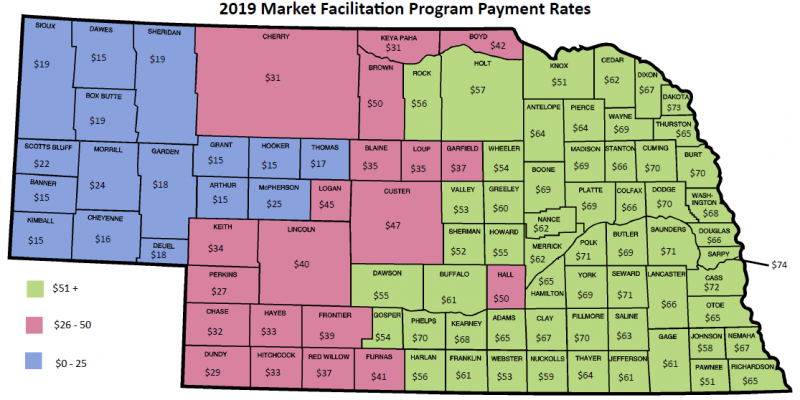 Secretary of Agriculture Sonny Perdue announced Nov. 15 the second round of market facilitation payments (MFP) will be distributed to producers later this week.

The assistance is meant to mitigate the economic impacts of trade retaliation on producers. The package, announced in July, authorized up to $14.5 billion for direct assistance to producers. Individual producers’ payments are based on payment rates calculated for each county. The map below shows the MFP county-level payments rates for Nebraska. Producers payments consist of the payment rate multiplied by the number of acres planted to eligible crops in 2019.

The MFP payments are to be made in three rounds. The first round, issued earlier tihs year, consisted of 50 percent of the county payment rate, or $15 per acre, whichever was higher. Data from the USDA suggests $6.8 billion in payments have been made in the first round according to the American Farm Bureau. Figure 1, created by American Farm Bureau, shows the first-round payments made as of Nov. 12 to producers of non-specialty crops in each state. For Nebraska, non-specialty crops include corn, wheat, soybeans, and sorghum.

The second round of payments will consist of 25 percent of the total payment expected. Only producers in counties with average payment rates above $15 per acre will receive second-round payments. Nebraska has six counties with the minimum payment rate of $15 per acre. The third round of payments is not certain and is contingent upon an evaluation of market conditions and trade opportunities by the USDA. Earlier this year Nebraska Farm Bureauestimated producers’ revenue losses could exceed $1 billion in 2019. In total, roughly 17 million acres in Nebraska are eligible to receive MFP payments.

Figure 1. 2019 MFP Payments for Non-Specialty Crops As of November 12