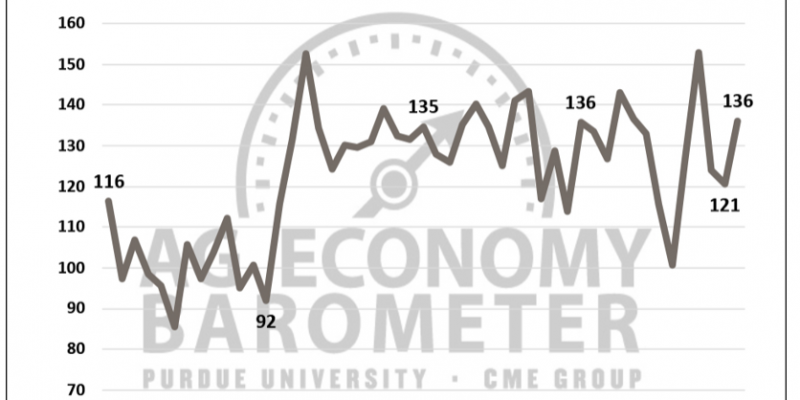 The Purdue University/CME Group Ag Economy Barometer, which measures agriculture producers’ sentiment regarding the agricultural economy, posted a gain in October to a reading of 136.

The latest nationwide survey of 400 agricultural producers showed producer sentiment has improved considerably from a reading of 101 recorded in May. The overall index compares producers’ current sentiments on the economy realtive to October 2015. Readings above 100 indicate producers are more positive relative to October 2015. Readings below 100 mean they are less positive. Producers’ sentiments improved for both current economic conditions (12 months into future) and future conditions (5 years into future). The index of current conditions registered a 115 and the index of future expectations registered a 146.

It’s interesting to note the volatility from month-to-month in the index, especially in 2018 and 2019. Producer sentiment on the economy appears to be closely related to current events. And the pace of change relative to current events over the past two years has been frenetic. The October uptick in the Barometer is most likely reflective of producers starting harvest and seeing the end of 2019 growing season, the hopeful passage of the USMCA with Canada and Mexico yet this year, and the reported progress of the trade discussions with China.