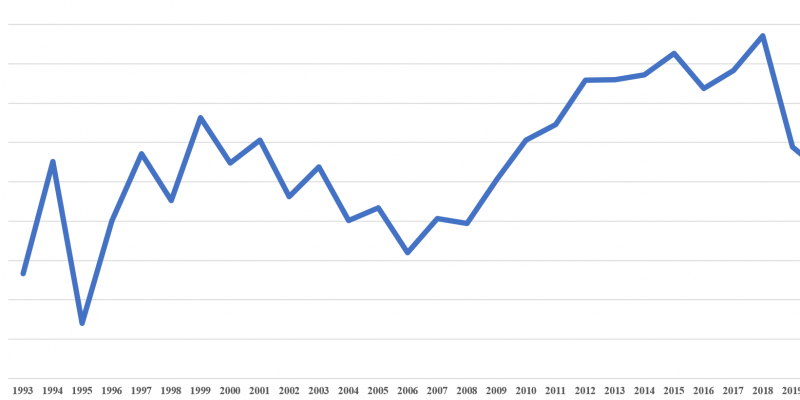 Planted acres and cropping patterns in Nebraska change annually. Farmers adjust their plantings and crop mixes based on market conditions, climate, environmental factors, seed technologies, government policies, and other factors. Figure 1 plots total acres devoted to field crops in Nebraska between 1993-2020. Note the scale for the number of acres begins at 18 million to provide a better sense of the annual changes.

Acres generally ranged between 18.6-19.2 million acres, falling within this range in 17 years of the 28-year period. The two largest annual changes occurred in consecutive years—1995 and 1996. Acres fell 823,000 acres, or 4.3 percent, in 1995 and subsequently increased 521,000 acres, or 2.85 percent, in 1996. Presumably wet and inclimate weather hindered the planting of crops in 1995. The second largest decline in acres occurred in 2019, when acres to field crops were off 566,000 acres. Remarkably, the average annual percentage change in acres since 1993 was 0.001 percent. In other words, in terms of percentage changes, gains and losses in acres canceled out.

Acres devoted to field crops increased between 1995-1999, trended lower between 2000 to 2006, then turned higher between 2007-2018 pushing above 19.2 million acres for seven consecutive years. Improved profitability with record commodity prices due to the growth of ethanol production and increased commodity exports encouraged farmers to plant more acres. The past two years saw acres drop below the 19.2 million threshold—this year’s acreage was near the 28-year average.

Thoughts are now turning to potential planted acres in 2021. Commodity prices since late August have increased dramatically. If the higher prices hold, it’s likely next year will see an uptick in acres.