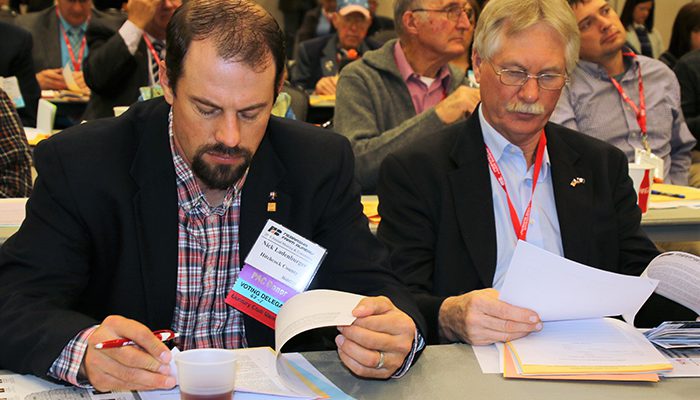 LINCOLN, NEB. – Farmers and ranchers from across the state set Nebraska Farm Bureau (NEFB) policy positions for the coming year and elected four individuals to the organization’s Board of Directors during the NEFB Annual Meeting and Convention held Dec. 2-4 in Kearney. NEFB is Nebraska’s largest general farming organization, representing the interests of farmers and ranchers who produce virtually every agricultural commodity in Nebraska.

Among the policy resolutions adopted was support for the continued availability and use of dicamba herbicide for use on dicamba tolerant crops. The Environmental Protection Agency (EPA) recently released new label directions for dicamba use in response to concerns about dicamba drift. Delegates also shared support for continued education efforts on proper dicamba application.

Protections for farm and ranch operations were also addressed by the delegate body in calls for strengthening private property and nuisance laws for agriculture. The resolutions seek to ensure existing Nebraska farms and ranches would continue to have the flexibility to change their operations as needed into the future without loss of private property rights and nuisance protections.

“Delegates also supported a resolution to prevent plant-based and lab-produced protein makers from using the word ‘meat’ or other ‘meat’ related terms from describing their products. With the lab-produced protein products entering the market, our members felt it was important to protect the significant financial investments made by farmers and ranchers over the years in programs to market and promote meat products from the traditional harvesting of livestock,” said Nelson.

Several resolutions were also advanced for consideration by delegates to the American Farm Bureau Federation’s Annual Meeting and Convention in January.

“With all the advancements in technology, our members want to make sure there is appropriate oversight for these technologies when applied in the agriculture marketplace. Our members adopted resolutions encouraging enhanced oversight of block trading should those types of market exchanges be found to be problematic in the future. Delegates also supported the use of blockchain technology provided it is beneficial to agriculture and trade relations,” said Nelson.

Delegates also called for the U.S. to join the Comprehensive and Progressive Agreement for the Trans Pacific Partnership (CPTPP). The agreement would provide tremendous market access for Nebraska agriculture commodities into CPTPP member nations. In addition, delegates advanced resolutions urging the U.S. to work with its allied trade partners to pressure China to address unfair trade and business practices.

Resolutions seeking flexibility in regulations governing the acquisition and use of antibiotics by farmers and ranchers to treat sick livestock also advanced.

In addition to setting state and making national policy recommendations, delegates elected four individuals to the Nebraska Farm Bureau Board of Directors.

The Nebraska Farm Bureau is a grassroots, state-wide organization dedicated to supporting farm and ranch families and working for the benefit of all Nebraskans through a wide variety of educational, service and advocacy efforts. More than 61,000 families across Nebraska are Farm Bureau members, working together to achieve rural and urban prosperity as agriculture is a key fuel to Nebraska’s economy. For more information about Nebraska Farm Bureau and agriculture, visit www.nefb.org.