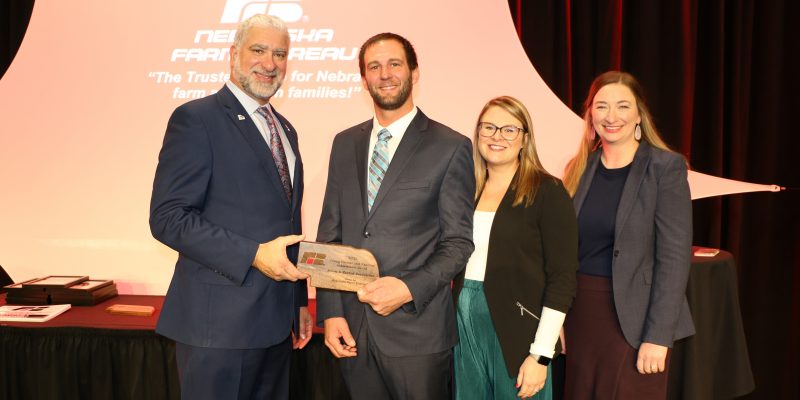 KEARNEY, NEB. – Adam and Kaylyn Venteicher of Pierce were named recipients of the 2022 Young Farmers and Ranchers (YF&R) Achievement in Agriculture award. The award was announced Dec. 6, at the “We Love our Members” luncheon during Nebraska Farm Bureau’s (NEFB) 105th Annual Meeting and Convention in Kearney, Neb.

The Venteichers are Pierce County Farm Bureau members and were selected based on performance in farm or ranch management, setting and achieving goals, overcoming obstacles, and service to the community and Farm Bureau.

Adam a fourth-generation farmer, grew up on his family’s corn and soybean farm near Pierce, Neb. His love for agriculture started at an early age. He was involved in FFA and began his own operation in 2003 when he purchased six bred cows for his FFA Supervised Agricultural Experience (SAE) project. In 2010, Adam earned one of FFA’s highest honors when he was named an American Star Farmer at the National FFA convention. After high school he attended Northeast Community College, where he received Associate Degrees in both Diesel Technology and Animal Science.

Kaylyn grew up on her family’s peanut and cotton farm near Rebecca, Ga. She was actively involved in 4-H & FFA, where she showed swine at the local, state, and national levels. She graduated college with a Bachelor of Science degree in Nursing and moved across the country to begin her career as a Registered Nurse. Whether it is helping work cattle or moving equipment between farms during planting and harvest, Kaylyn is always ready to jump in and lend a hand on the farm.

Adam and Kaylyn were married in 2015 and have three children, Adley (6), Kip (4), and Anna (1). Today, the Venteichers have grown their farm to include row-crop acres of rye, corn, soybeans, and alfalfa. They have increased their cattle herd from just six cows to more than 200 cow/calf pairs and heifers. They also have a shared ownership in Venteicher Farms LLC and they manage farmland in Georgia.

The Venteichers serve as the Northeast region representatives on the YF&R Committee and will continue to grow their leadership with Farm Bureau.

Farm Bureau members between the ages of 18 and 35 can apply for the Young Farmers and Ranchers Excellence in Agriculture Award. As the Nebraska winner, Adam and Kaylyn will receive $500 and an all-expenses paid trip to the 2023 American Farm Bureau Annual Convention in San Juan, Puerto Rico in January to compete with other state winners at the national level.

Approve
3
Not Sure
1
Disapprove
0
Previous