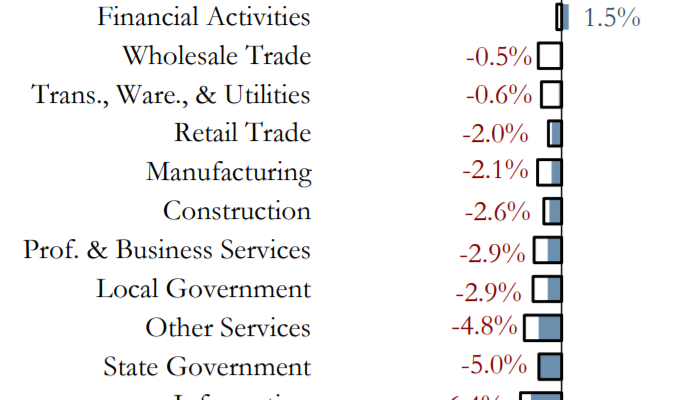 The Kansas City Branch of the Federal Reserve Bank published its latest edition of The Nebraska Economic Databook on November 9. Compiled by Nathan Kauffman, assistant vice president and Omaha branch executive, the report provides a snapshot of jobs in Nebraska’s economy.

Total Nebraska jobs numbered just a tad over 1 million in September, off 2.5 percent compared to last year. The largest job increases occurred in federal government (8.2 percent) and healthcare (2.6 percent), no doubt due to COVID-19 (Figure 3). Financial activities also saw an increase in jobs compared to last year of 1.5 percent. All other sectors employed fewer Nebraskans this year compared to last. Leisure and hospitality saw the biggest declines losing nearly 14 percent of its labor force, clearly due to COVID-19. In all, there were 26,100 fewer jobs in September 2020 compared to September 2019.