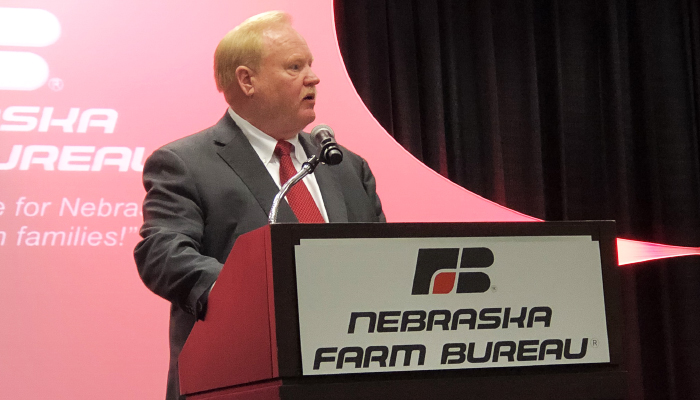 KEARNEY, NEB. – In his annual address at the Nebraska Farm Bureau Annual Meeting and Convention, Nebraska Farm Bureau President Steve Nelson praised the efforts of Nebraskans, especially Farm Bureau members and their neighbors who rallied together in the face of historic blizzards and floods that ravaged the state in the Spring of 2019.

“I’ve never seen the Farm Bureau family come closer together or be stronger than it’s been in 2019. In some of the worst conditions I’ve ever seen, Nebraskans across the state found out exactly what it was like to be a part of the Farm Bureau family when our members and our organization were there to help them get back up, persevere, and push forward in disaster recovery,” said Nelson.

In relaying his appreciation for the work of Farm Bureau members and the Farm Bureau organization, he thanked all those who made financial contributions to the organization’s Disaster Relief Fund.

“I had no idea how much money we could raise and wasn’t sure it would be enough to make a difference, but as we were able to capture and share stories of those impacted, the awareness of the needs grew and the fund climbed steadily to more than $3.4 million, with more than 6,000 donors and gifts coming from all 50 states, Washington, D.C., as well from active military located in nine different countries,” said Nelson. “This amazing generosity has allowed us to make nearly a thousand financial distributions that have served tens of thousands of Nebraska’s farmers, ranchers, and rural communities.”

In terms of agriculture policy issues, Nelson called on the legislature and the Governor to make sure excess state tax revenues are used for property tax relief.

“When the legislature convenes in January there will be a lot of talk about how to spend roughly $100 million plus in state tax revenues that aren’t obligated in the state budget. There will be plenty of ideas on how to spend that money. I’m calling on the legislature and the Governor to make sure those revenues are used specifically for property tax relief,” said Nelson. “The overreliance on property taxes is holding Nebraska agriculture back; and it’s holding our state back.”

In addition to the use of those revenues for property tax relief, Nelson said the legislature must continue a path to find new and different ways to fund K-12 schools as Nebraskans can no longer afford to place such a heavy burden on property taxes to fund education.

In his address, Nelson also spoke to the importance of growing international markets for Nebraska’s agriculture products, highlighting several actions needed including congressional passage of the United States – Mexico – Canada Agreement, finalizing a deal that would eliminate the tariffs China has placed on agricultural products, work to find and sign trade deals with new partners around the globe, as well as reforms to the World Trade Organization.

Nelson also told members that changing consumer tastes and demands, evolving supply chains, the global economy, continued emphasis on improving environmental management, technological innovation, and the growing ability to direct market to consumers, were identified as factors that will continue to drive opportunities in agriculture.

“For agriculture to be successful, we must continue to look forward. Nebraska must be open to new opportunities to grow agriculture, even when those opportunities look different than what has been available to previous generations,” said Nelson, who specifically pointed to the Nebraska families who are now raising chickens due to the Costco affiliated processing plant located in Fremont, and the opportunity for Nebraska farmers to commercially produce industrial hemp in 2020.

In his closing remarks, Nelson pointed to the need for neighbors to continue to look out for each other during challenging times.

“I know 2019 has been a difficult one for a lot of people. I hope and pray that 2020 is better for all of us. If you see someone you think is struggling, don’t be afraid to engage. Talk with them or share your concern with someone close to them who can help. Your compassion and generosity just might change someone’s life, or you might even save it,” said Nelson.