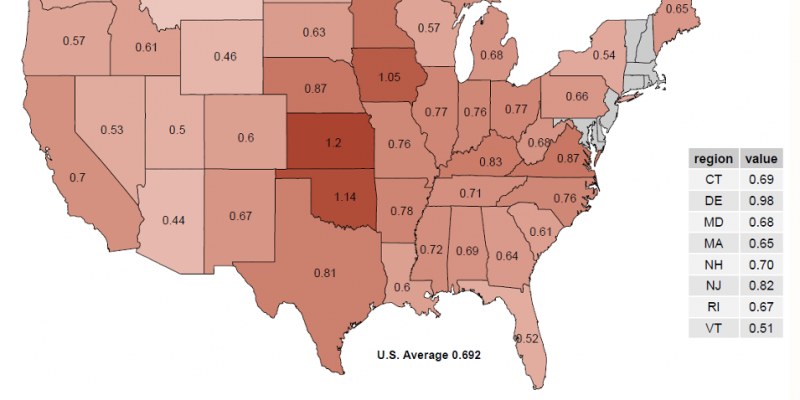 Over the past few weeks Tidbits has examined Nebraska’s cow/calf and feedlot sectors. Tidbits this week delves into the stocker sector. Stocker operations (or backgrounders) serve as a regulating valve for the industry, adjusting the timing and volume of cattle flows into feedlots as the market dictates. Elliott Dennis, an agricultural economist at the University of Nebraska, describes stocker operations as, “any operation that engages in postweaning growing programs that produce commercial feeder cattle.” The sector typically takes weaned calves, adds weight, then moves them into feedlots for finishing. Stocker operations consist of cow/calf producers who retain calves, commercial stockers, or feedlots who background calves.

The number of cattle in stocker operations can vary depending on feed costs and other factors. Relatively high feed costs mean feedlots would rather purchase heavier calves. Market prices reflect this and create opportunities for stockers to feed cattle. The reverse is also true. Relatively low feed costs mean feedlots would rather purchase lower weight calves, meaning less opportunity for stockers. Thus, the size, scope, and activity by stocker operations will shrink and swell.

Stockers are the buffers between the cow/calf and feedlot sectors. Derrell Peel, an agricultural economist at Oklahoma State University, said “stocker activities arbitrage feeder cattle across wights, space, and time to provide an efficient set of market prices.” Like the cow/calf and feedlot sectors, Nebraska’s stocker operations play an important role in the nation’s beef sector. This year with the beef processing shutdown due to COVID-19, the role as a regulating valve was even more critical.

“Pull Our Hair Out”

Putting 2020 in the Rearview Mirror